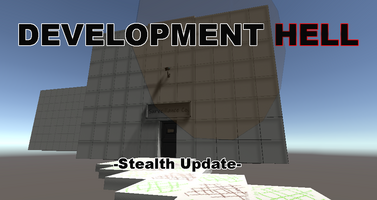 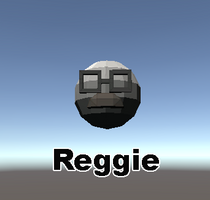 Alpha 6, uploaded last night, is the first in a line of updates to deepen game play in the distinct, existing areas of Development Hell. Also, today is the start of a recurring in-game scavenger hunt that will be changed each update, but we'll go through that at the end.

So onto the updates. While I like the general build of the current game it was much too shallow. Whenever I was testing new jokes or mechanics I could usually get from start to finish in less than 5 minutes, at least if I held down the sprint key. So, I have decided to start going back through every major section of the game to add more jokes, interactions, distractions, game play, and just generally the things I wanted to add originally, but I was too impatient.

This time around I focused on the stealth section of the game which is very early in the game, but previously had literally no player interaction, a few tiny rooms, and only one decent joke. As of this update, the stealth section has at least two solid jokes as well as a handful of terrible ones, newer and larger rooms, multiple available interactions, more and better audio with actual feedback, and even a spatial puzzle that should feel like a mid-90s stealth game. With all those changes, I am confident that the stealth section has ballooned form 10 seconds of game play to at least a good 45 seconds. Next update, I will try to build up the platforming section.

So, onto the scavenger hunt.

Alright, so for each of these content updates, I will be hiding Reggie, a disembodied head, somewhere in the newly updated section and if you are one of the first 5 people to find him, I will buy you a Steam game. This update, just $1 games. Sometimes he will be just out somewhere, other times he might require some parkour, maybe I’ll even make some weird little puzzles.

-Find Reggie in the updated section

-Click on Reggie and write down the code word

-Email the code word to Unstable.Studios23@gmail.com

-Hope you’re one of the first five people

I hope you enjoy the new content, and happy hunting.